Six of us from several countries (Bordeaux is great for that!) enjoyed a dinner with great wines this past week. 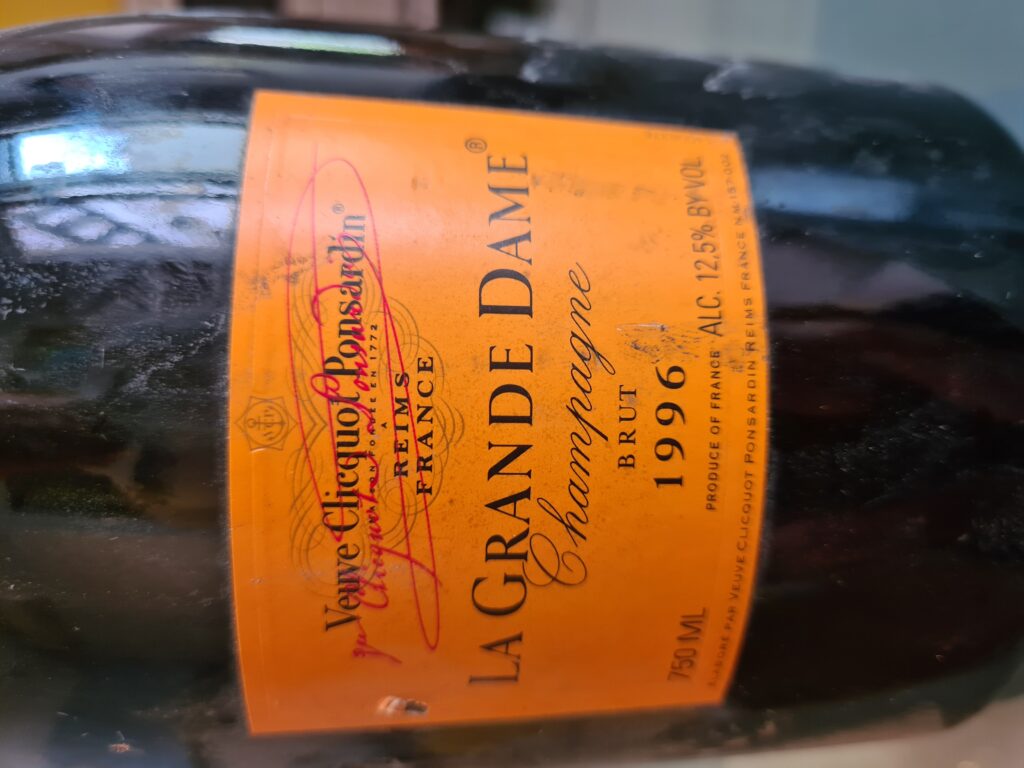 We started off with a prestigious Champagne. I love Champagne as an aperitif, can drink it with food in a pinch, but downright dislike it with dessert (a common practice in France). In any event, this 1996 Grande Dame was brought out in honor of a Japanese-American friend who will be working on and off with Veuve Clicquot in the near future. La Grande Dame (60% Pinot Noir/40% Chardonnay) is their top wine and 1996 is considered a great vintage. At a quarter of a century, the wine was a deep amber-gold, definitely showing its age. The bead was tiny and still relatively vigorous. The bouquet was oxidative, with nutty, predominantly Chardonnay aromas. In true Veuve style, the wine was quite rich on the palate. In France, such old Champagnes are said to correspond to “le goût anglais”. Although I liked the wine, I’d have preferred it ten years ago. 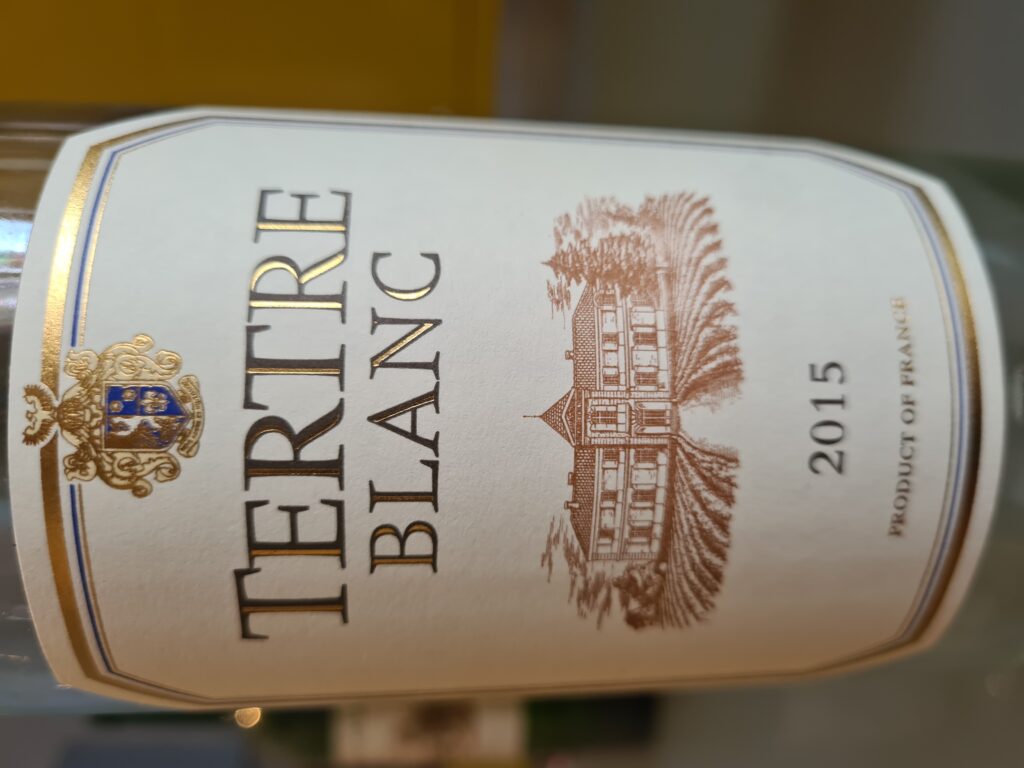 Next up was an oddball wine, served blind, as were the remaining two. This was the 2015 white Château du Tertre. There was no hope of anyone guessing this since it consists of a very unusual blend of grape varieties: 42% Chardonnay, 31% Gros Manseng, 16% Viognier, and 11% Sauvignon Blanc. For that reason, it can only be sold as “Vin de France”, even though it comes entirely from du Tertre, a classified growth in Arsac (AOC Margaux).
In fact, this white proved to be more of a curiosity than a fine wine. It was rather hard to pin down and was somewhat tired even at 6 years of age. Still, it was an enjoyable discovery.
We sat back and tried to name all the white wines produced in Margaux and came up with chx. Margaux, Cantenac Brown, Palmer, Prieuré Lichine and, of course, du Tertre.

There seems to be a certain amount of revisionism going on about recent great vintages. 2000 was much heralded, made out to be the bee’s knees, and inevitably labelled the “vintage of the century” (already…). However, preferences are now being voiced for 2005, 2009, and 2010. Who’s right? As usual, vintage ratings need to be nuanced, not only based on Left Bank/Right Bank criteria, but also the performance of individual estates.
Be that is it may, I enjoy the 2000 great growths tremendously, and find that at age 21 most are drinking well now.
Anyway, these two heavy hitters from Pomerol have a loyal following and I was delighted with both of them. 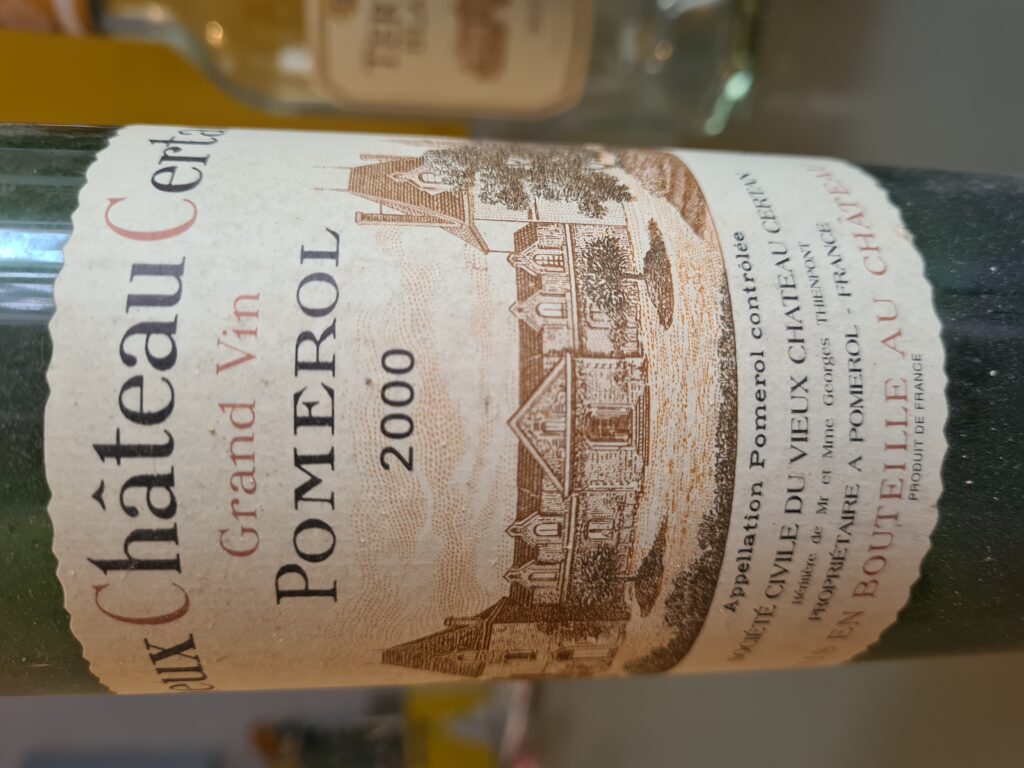 Vieux Château Certan is owned by the Belgian Thienpont family who also have their fingers in several other Bordeaux pies, including the rare and famous Le Pin. Unassuming Alexandre Thienpont is a perfectionist who has done much to enhance the estate’s reputation.
2000 VCC showed extremely well in August 2021, and most of us around the table felt that it was on its plateau, feeling that, although it will be enjoyable for years to come, it is as good now as it ever will be. Appearing older than the Trotanoy, it featured a divine bouquet with spicy notes and complex, ethereal aromatics along with the inevitable hint of truffle. On bouquet alone, 2000 VCC probably edged out Trotanoy of the same vintage. But as we shall see, Totanoy has not said its last word… Anyway, 2000 VCC’s innate elegance came through on the palate as well, but in a, dare I say, feminine, Margaux-like way. We enjoyed the wine with grilled veal chops and chanterelle mushrooms, but I could see how a wine like this could partner the very greatest creations of French cuisine due to its tremendous class. The aftertaste was fresh, soft, and evanescent, like the bouquet. 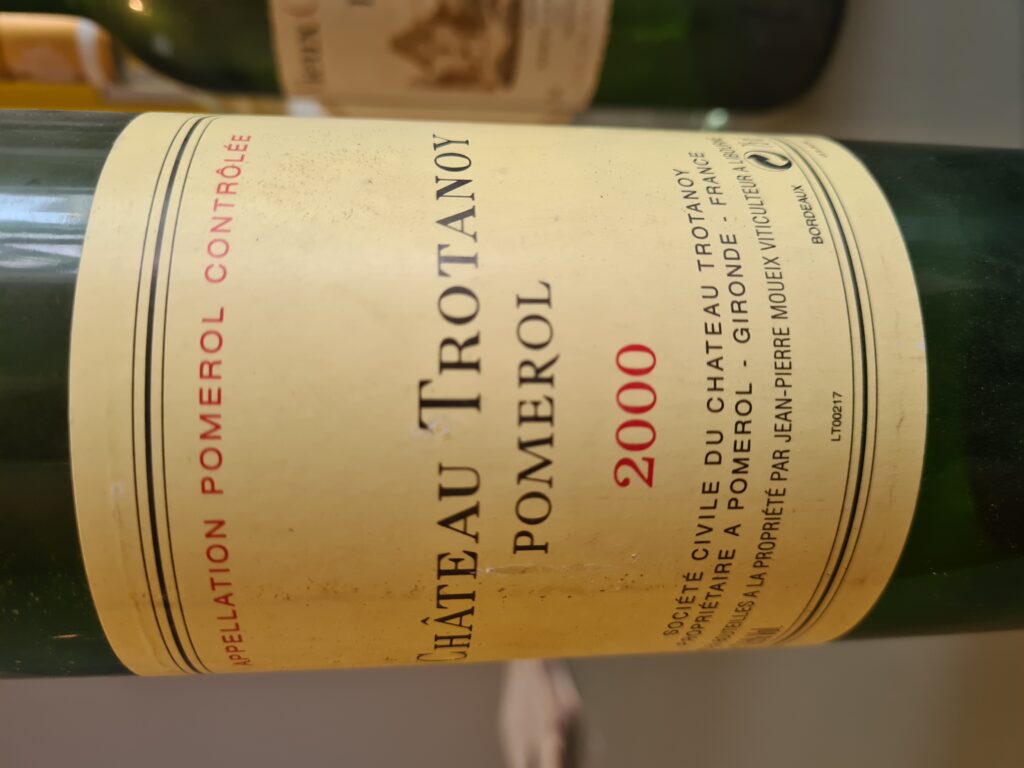 We did well to taste 2000 Trotanoy after the VCC because the former was a much bigger wine. If we believe what’s printed on the labels, alcoholic degree does not explain everything here. The nose of the Trotanoy was very concentrated with sweet black fruit and earthy overtones. It was quite seductive, if more obvious than the VCC. 2000 Trotanoy was a revelation on the palate, with a wonderful velvety texture and plenty of body and richness. I might allocate demerit points based on an impression of alcohol, but also give this a fair chance of integrating with further age. However, the wine clearly will always be imposing – not that this precludes the refinement one expects from top tier Pomerol. The aftertaste was long and powerful.

The bottom line is that the competition between these two Pomerols was a draw. That being said, the same match in ten years’ time would probably yield different results, in my opinion.
For what it’s worth, here is the area under vine of three famous Pomerol estates:
Pétrus: 11.5 hectares
Trotanoy: 7 hectares
Vieux Château Certan: 14 hectares
Trotanoy’s second wine is called L’Espérance
VCC’s second wine is La Gravette.
Both are good value for money.
Never heard of a second wine for Pétrus.