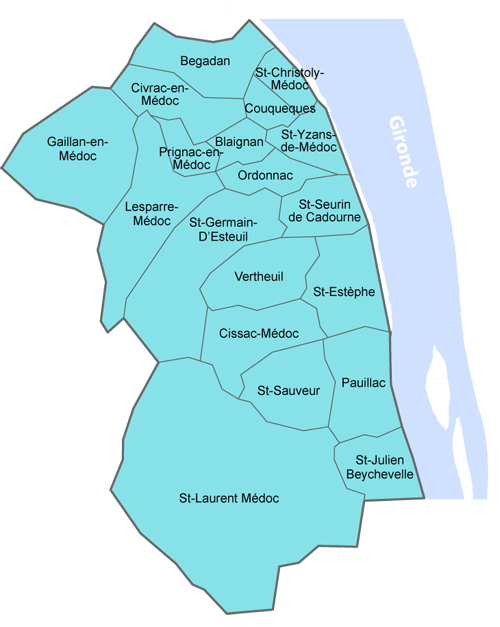 When I first began drinking French wines many years ago, ones from the northern Médoc were sold under the name “Bas Médoc”. However, the French word “bas” means “lower” and has a negative connotation (even though Bas-Armagnac is considered the best part of the appellation…), so the name was changed to simply Médoc, and professionals now refer to the region as Nord Médoc.

The prices for both vineyard land and wine drop somewhat precipitously once you go north of Saint-Estèphe (or, more exactly, the next town up, Saint-Seurin-de-Cadourne, where Sociando Mallet is located). The market expects wines from the Nord Médoc to be inexpensive, rather early maturing, sturdy, and reliable – not earthshaking. And there are certainly plenty to choose from since there are some 5,800 hectares of vines…

Unfortunately, not many names stand out, partly because there are surprisingly few links here with the famous crus classés further south, notwithstanding exceptions such as Léoville Las Cases and Potensac (which came into the Delon family by marriage) and Cos d’Estournel’s Goulée. This is in contrast to the classified growths of Saint Emilion and their many sister estates in outlying districts (satellites, Castillon, Lalande de Pomerol, etc.).

I first heard about Clos Manou from French friends, who are often aware of good wines that are little-known in English-speaking countries. I tasted and very much enjoyed the wine, so thought it would be worthwhile to make the hour and a half trek from Bordeaux to Saint-Christoly to visit the estate and chat with the owner, Stéphane Dief. 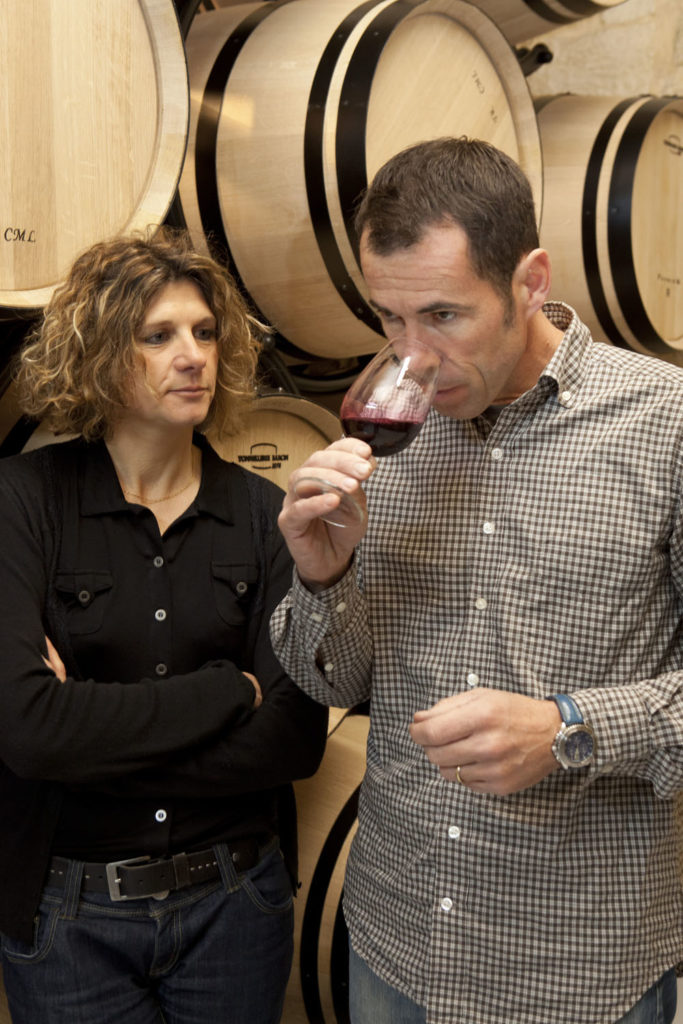 The French use the English expression “un self-made man”, which pretty much describes Stéphane Dief. He is a local son whose father sold wine for the Marquis de Saint-Estèphe cooperative. Stéphane worked a while for a wine broker, then decided to quit and produce his own wine. The original vineyard was handkerchief-size. Although not actually a “clos”, or walled vineyard, the name was chosen because it reflected the tiny scale, and Manou is the nickname given to Stéphane by his sister. 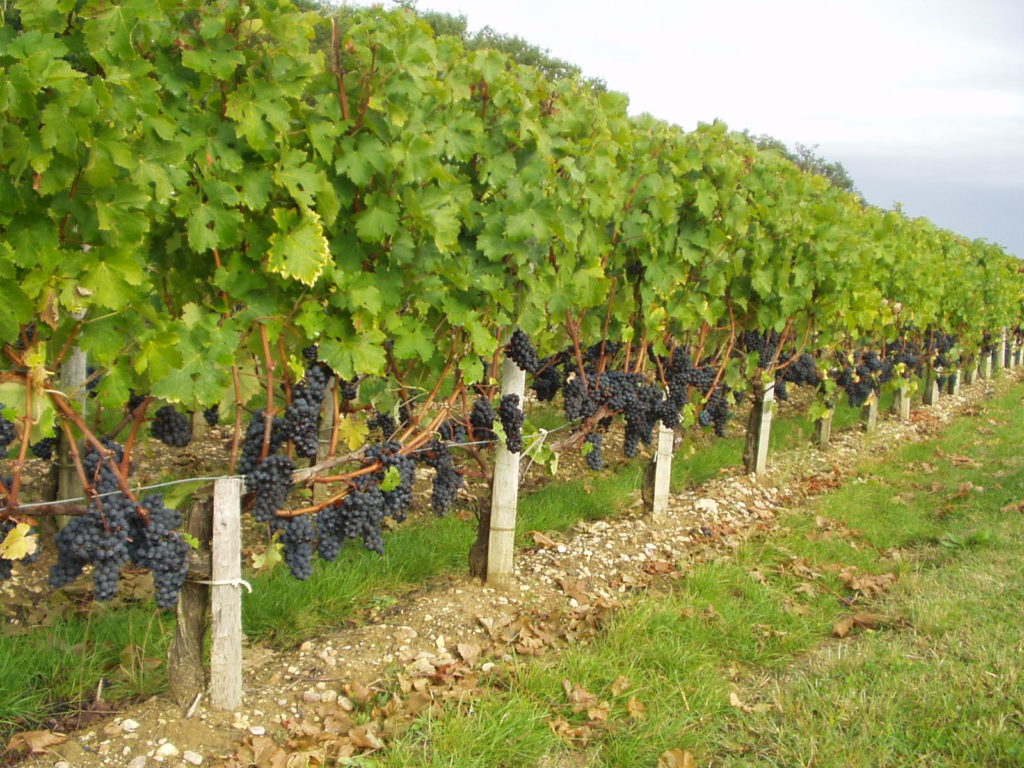 Stéphane’s first vintage – 600 bottles – was in 1998. He has since painstakingly built up vineyard holdings to 18 hectares comprising 55 separate plots. He does not wish to expand much further. The estate has three different sorts of terroir: gravel and clay, sand, and clay-limestone. The nearby Gironde estuary has a tempering influence and there is never frost. The breakdown of grape varieties is 43% Cabernet Sauvignon, 53% Merlot, 2% Cabernet Franc, and 2% Petit Verdot. The vines are farmed virtually organically (no pesticides, fungicides, or herbicides), but Stéphane is not interested in certification. By the same token, he has never sought cru bourgeois classification. His vines are trained rather low and density is high (10,000 vines per hectare). He does not believe in green harvesting, nor is he afraid of largish yields seeing as the quality of the wine proves that they are in no way detrimental. The grapes are picked into small crates and sorted three times before crushing. Stéphane is a firm believer in pigeage and, unusually, practices bâtonnage to give the wine more volume. Very little sulphur is used in winemaking.
The cellars at Clos Manou are in several parts and seem extremely well-kept. There is even a room devoted to housing amphora and 16 concrete “eggs”. Stéphane feels that the latter add unique freshness and richness. About 70 to 75% of the grand vin (Clos Manous) is barrel aged, and between 60 and 70% of barrels are new, with a light toast. The Clos Manou vineyard and winemaking team also looks after three other estates. 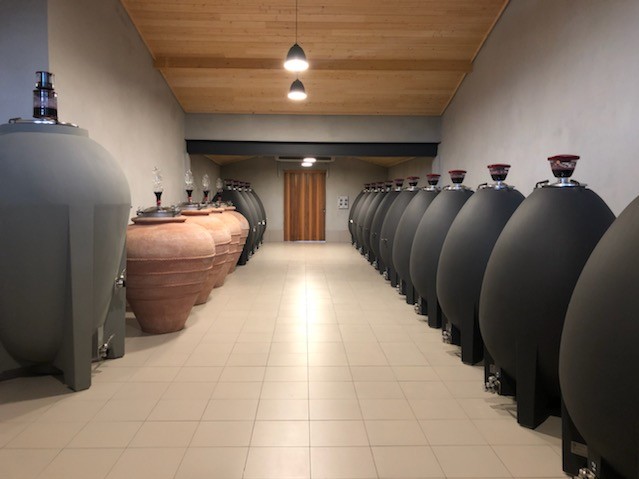 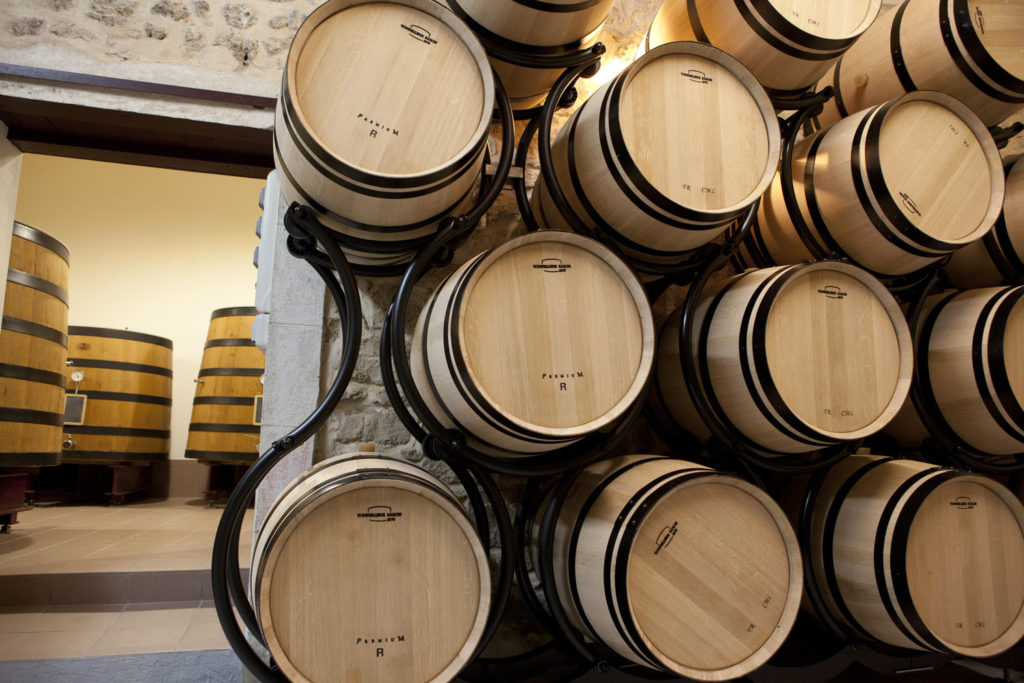 One day, a neighboring winegrower offered to sell Clos Manou a small plot with very old vines the owner felt sure would need to be uprooted and replaced. As it turns out, these were ungrafted pre-phylloxera vines (80% Merlot) and when Stéphane bought the plot, he decided to make a special cuvée from them named 1850. This wine receives very high praise from Jane Anson in her recently-published book, “Inside Bordeaux”. Stéphane was kind enough to give me a bottle of this rare wine which I will drink at a later date.
Clos Manou is distributed via the Place de Bordeaux (available to major négociants). About 60% is now exported and 20% is sold directly to private customers in France. While costing more than wine from nearby estates, Clos Manou is still a bargain and one of the brightest stars in its appellation – the sort of wine to serve to your friends blind and surprise them.
The 2016 Clos Manou received a Coup de Cœur (“Special Favorite”) rating in the 2020 Guide Hachette des Vins. 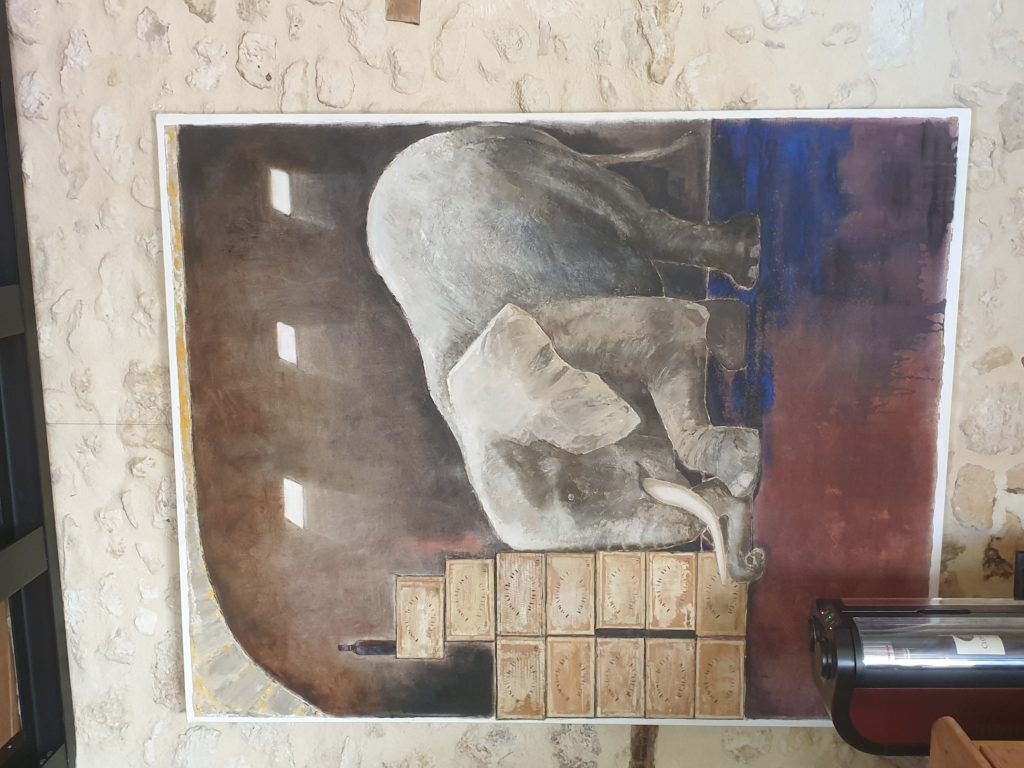 No description of Clos Manou would be complete without mentioning their unusual label. This depicts an elephant bending down and sticking its tusks between a stack of wooden wine cases. The story here is that Stéphane saw the original painting by a Breton artist at a local exhibition and purchased it. It now hangs on the tasting room wall of and has been reproduced on the label since 2009.

I tasted several wines while at Clos Manou: 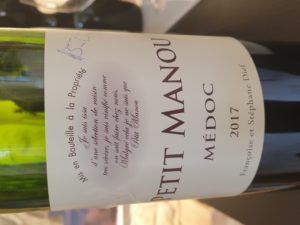 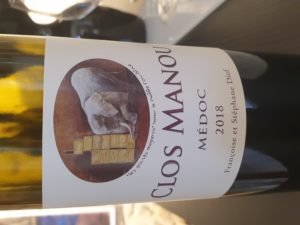 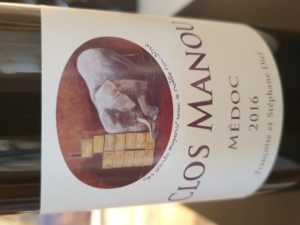 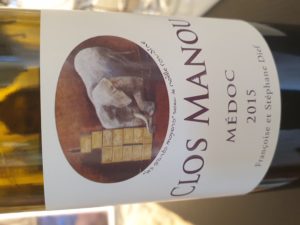 2017 Petit Manou (second wine) had a simple, but attractive bouquet and a fresh, crunchy, raspberry flavor. Nice easy drinking. 2015 Clos Manou had elegant oak and quintessential Médoc aromas. It showed plenty of volume and lovely texture on the palate, as well as a long aftertaste. It is already showing well, though will obviously benefit from further ageing. 2016 Clos Manou had a sophisticated bouquet along with great structure, a sensual mouthfeel, and lively acidity. Something truly special. I ended the tasting with 2018 Clos Manou, which had just been bottled. I quite liked this despite its rather massive structure and 15% alc./vol. There was something rich, chewy, and meaty here with marked Merlot characteristics. Although a touch hot, I could see this going beautifully with hearty food on a cold day.