I have heard about Nigel Platts-Martin’s famous London restaurants (the Square, the Ledbury, Chez Bruce, the Glasshouse, and La Trompette) for years, so I was anxious to go to one of them when my friend Ian Amstad told me he was organizing a wine dinner focusing on Château Ponet Canet at La Trompette on the 3rd of May. Owner Alfred Tesseron kindly agreed to come over from Bordeaux to attend the meal and to comment on the wines. 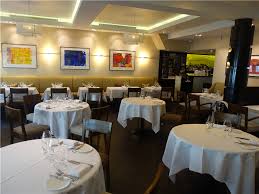 Ian, Tim Mc Cracken from Paris, and I met Alfred at Dukes Hotel in Mayfair and then took a long taxi ride with him to Chiswick where La Trompette is located.

There were 16 of us from 5 different countries at two tables set apart from one of two main dining rooms with a screen. I sat with Nigel on my left and Alfred on my right. Nigel seemed amazingly at ease for a restaurateur. This is because he knows how to delegate and trusts his staff. They most certainly did not let him down.
Alfred was also at ease in English and speaking in public. In addition to anecdotes about Pontet Canet, he also talked about his Cognac business and his family’s recent purchase of Pym Rae vineyard in the Napa Valley, an estate formerly belonging to Robin Williams. 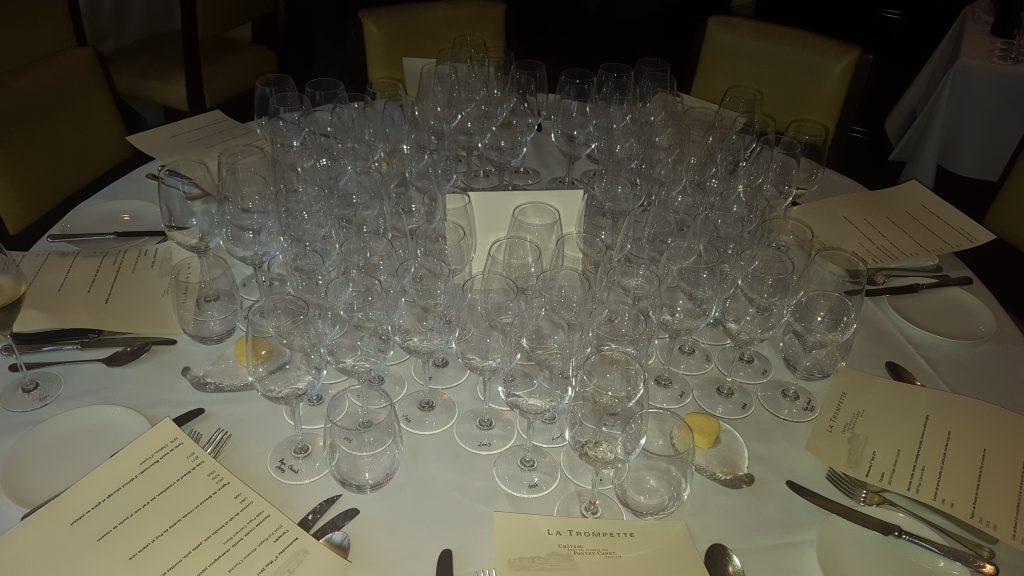 A forest of glasses!

Service was superb throughout the meal, with a different glass for each wine. The food was top-notch and the main course as good as anything I might find in France. 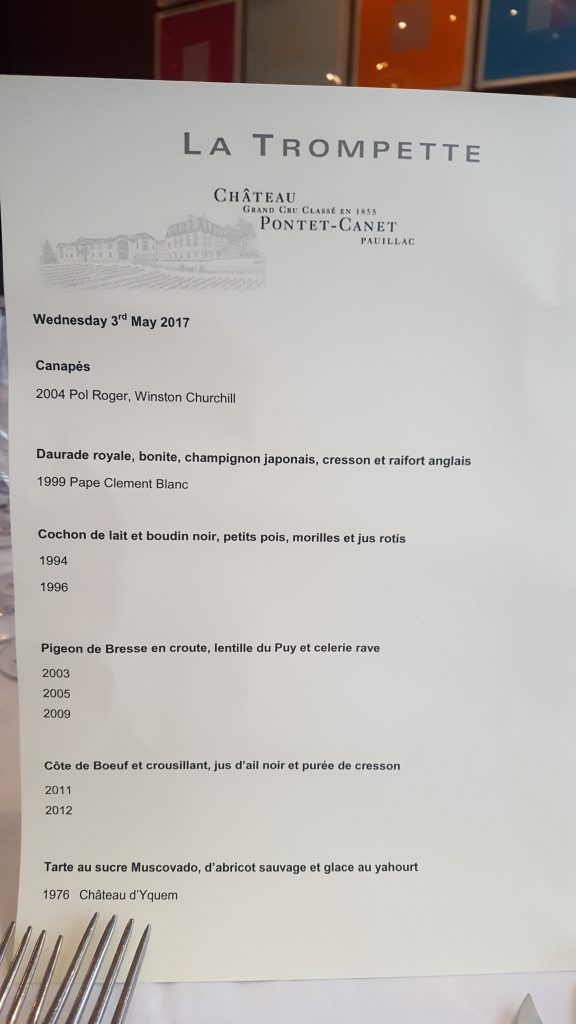 We started off with 2004 Pol Roger Cuvée Winston Churchill for the apéritif. This was quite a fine Champagne, but I cannot honestly say that it had a special spark or inspiration.
I don’t think that anyone would have taken the 1999 white Château Pape Clément (45% Sémillon, 45% Sauvigon Blanc, and 10% Muscadelle) for an 18-year-old wine if served blind! It had a very pale golden color and a nose of lemon and oak, plus a matchstick aroma. It was quite virile on the palate, with a long persistent aftertaste showing plenty of oak – maybe too much. This still has many years ahead of it and I wouldn’t see its peak before 2025. 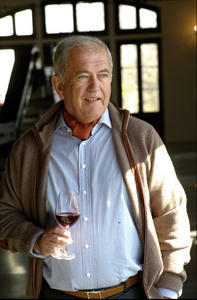 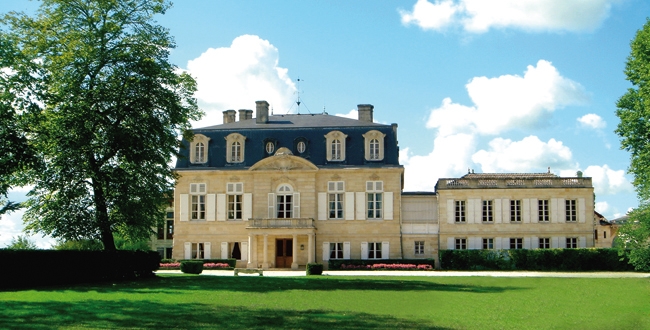 1994 Pontet Canet: This is hardly considered a stellar year, but I was very pleasantly surprised. The color was a lovely deep aristocratic crimson. The nose clearly said Pauillac with ripe fruit, truffle, and graphite overtones. The wine was soft, mineral, and well-balanced on the palate. Slightly thin compared to the greatest vintages, it is nevertheless a very commendable effort.

1996 Pontet Canet: Once again, a fine deep, dark color. The bouquet was somewhat monolithic with pencil shaving aromas. The wine was a bit dumb on the palate, and one has the impression that it still needs time some 21 years after the vintage. The tannin is fine-grained. The 94 is more ready and user-friendly, but the 96 will be a better wine when it reaches its peak in perhaps ten more years. While not forthcoming or together at this stage, the potential is clearly there. The finish is long and promising.

2003 Pontet Canet: This is quite a controversial wine among Bordeaux lovers, with its champions and its detractors… The color was fine, and the nose pure and up-front. The wine was big, spherical, and raisiny on the palate. It seemed strong, assertive, and a bit dry, while lacking in a marked underlying character. The overall structure was massive with plenty of grip, dry tannin, and black fruit on the finish. I don’t see where this is going, but I have one bottle in the cellar and will give it a few years more to find out. In other words, this is not at all the sort of 2003 that is top-heavy, low in acid, and to drink young.

2005 Pontet Canet: This wine had a deep, impressive color and an altogether classic nose of cedar and Cabernet Sauvignon grown in its region of predilection. The bouquet was somewhat New World in its concentration and exuberance. This quality followed through on the palate, which was meaty and a little extravagant, with fine oak. A long mineral aftertaste bodes well for further ageing. I’d give it about 15 more years. 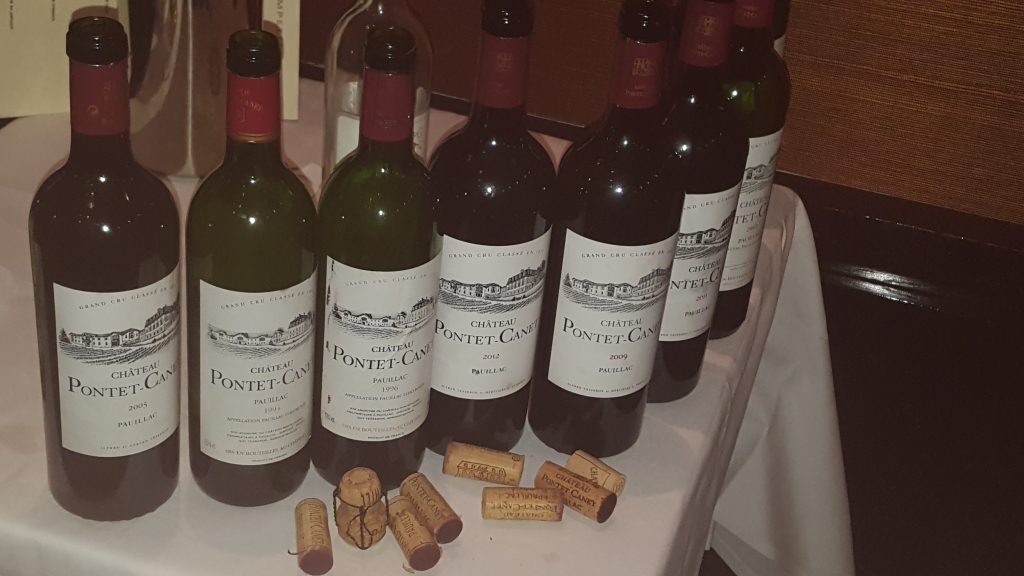 2009 Pontet Canet: The color was impeccable, as deep as one could hope. The nose was redolent of caramel, oak, and subtle cassis, whereas the taste featured coffee-vanilla components and spread out beautifully on the palate. The balance was superb. This wine was both gutsy and elegant. There is also what I’d call a streak or a line of cool, refreshing minerality that gives this vintage of Pontet Canet its unique personality and makes it extremely interesting. I tasted this wine en primeur in 2010 the same day I went to three first growths – and Pontet Canet showed in the same class… I was not at all disappointed with retasting, and it unquestionably holds tremendous promise.

2011 Pontet Canet: Fine youthful appearance with a bouquet showing toned-down oak and gorgeous blueberry, blackberry, and blackcurrant fruit aromas. Rich and full on the palate, but not exaggerated. There was obvious oak and a caramel flavor that needs to integrate over time. This is a “digestible” wine that was unexpectedly delicious. One to watch.

2012 Pontet Canet: Great color with a nose of ripe fruit, graphite, and sweet oak. This oak, along with a caramel flavour, compete with the fruit at this time, but the wine is just going through an awkward phase in my opinion. Although my least favorite wine of the tasting, it would be unfair to say that it was wanting. It simply needs to come together. 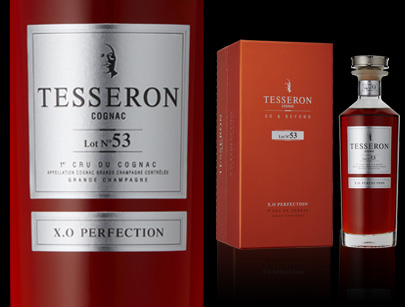 We finished with an Yquem which, as always, is a great way to end a meal, even if this particular bottle of 1976 seemed a little tired. However, that was not to be the last word since Alfred was also kind enough to pour us all a glass of his Lot N° 53 Perfection Grande Champagne X.O. Cognac. Like all the best brandies from the Charente, it was feather light and elegant to the point where you have no idea that you are drinking a strong spirit!