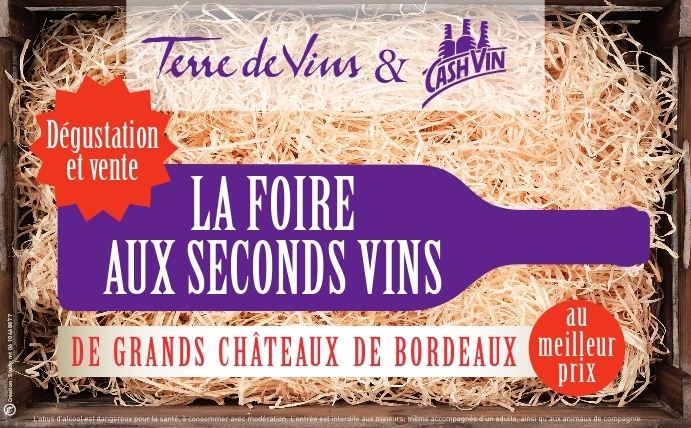 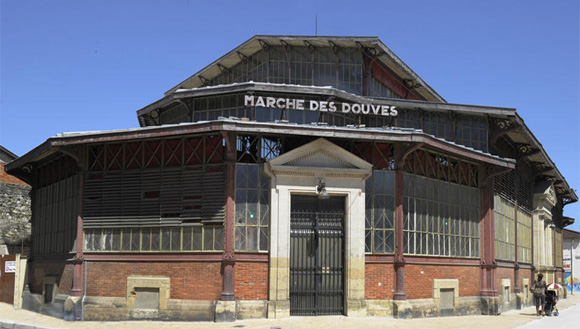 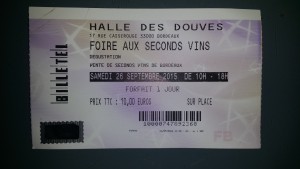 I had never before attended a tasting of second wines as such, i.e. nothing but second wines, so I was very interested to do so on Saturday the 26th of September in Bordeaux.
This event was organized by Terre des Vins magazine, part of the Sud-Ouest media group and Cash Vin (http://www.cash-vin.com/), a wine merchant, in the newly renovated Marché des Douves next to the Capucins market.
Second wines are widely perceived to be a mixed bag and the sort of wine lover who thinks Bordeaux is limited to the great growths is likely to snub anything “less than the best”.
However, this reasoning only goes so far…
In fact, the history of second wines goes back a very long way. There are records of such wines in the 18th century, and their increased number in recent years has gone hand in hand with improved quality starting in the 1970s. In fact, most classified growths have a second wine nowadays.
The principle is quite simple: the grand vin, the estate’s flagship wine, can be improved by selecting only the best vats. The remaining wine is less good, but also less expensive and usually ready to drink earlier. For consumers, second wines are worthwhile to the extent that their quality does not lag too far behind that of the grand vin and that they cost significantly less.
They are also ideally suited to restaurant wine lists.
The selection process includes a variety of parameters. In difficult years, the proportion of second wine is generally much higher and, in extreme cases, can totally replace the grand vin. Also, vats from specific plots not quite up to the standard of the main label are put into the second wine, as are wines from young vines.

Then there is the issue of second wines that refuse to admit they are second wines… Examples that spring to mind are Forts de Latour and Clos du Marquis, but there are many others. Their owners claim that these come from a specific part of the vineyard and do not incorporate less good vats from the best part. They therefore must be seen as “estates within an estate”. I don’t find this explanation very convincing and despite the hype still consider them second wines. What else do you want to call them? Furthermore, Latour and Léoville Las Cases even produce third wines, respectively le Pauillac de Château Latour and Le Petit Lion. Château Palmer’s Alter Ego, is not presented as a second wine either, but this just boils down to semantic differences.
Created in 1930, Mouton Cadet was originally the second wine of Château Mouton Rothschild. Over the years, it has become a branded AOC Bordeaux négociant wine.
French for second wine is second vin rather than deuxième vin. The reason for this is that when there is a series of just two things, the word second is used. As soon as there are three or more things, deuxième replaces second.

The retail prices are in euros per bottle including sales tax (VAT).
The purchase of 6 or more bottles entailed a discount of approximately 10-15%.

Conclusion / bottom line: Like any tasting, this is a mixed bag, so generalizations are difficult. However, the best wines were well worth the money, and some were true bargains, for people who drink wine rather than money. Also, if you like the “grand vin”, there’s a very good liklihood you’ll like the second wine! 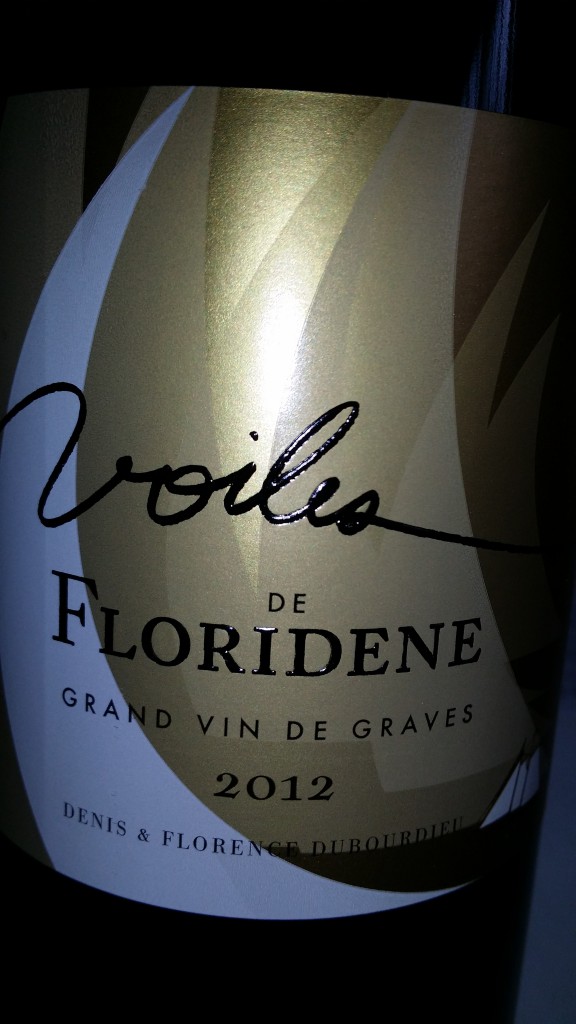 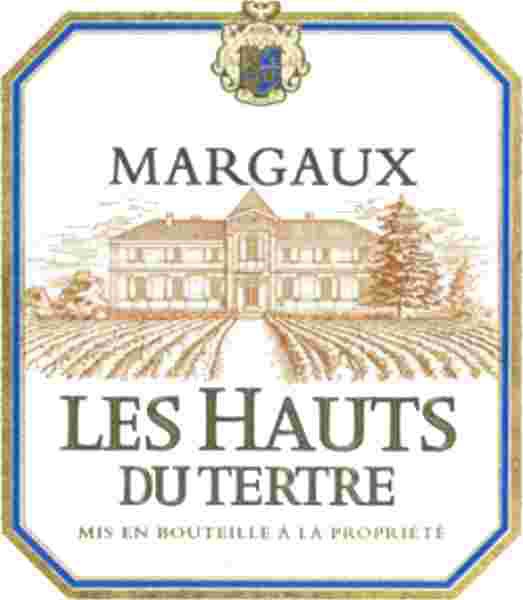 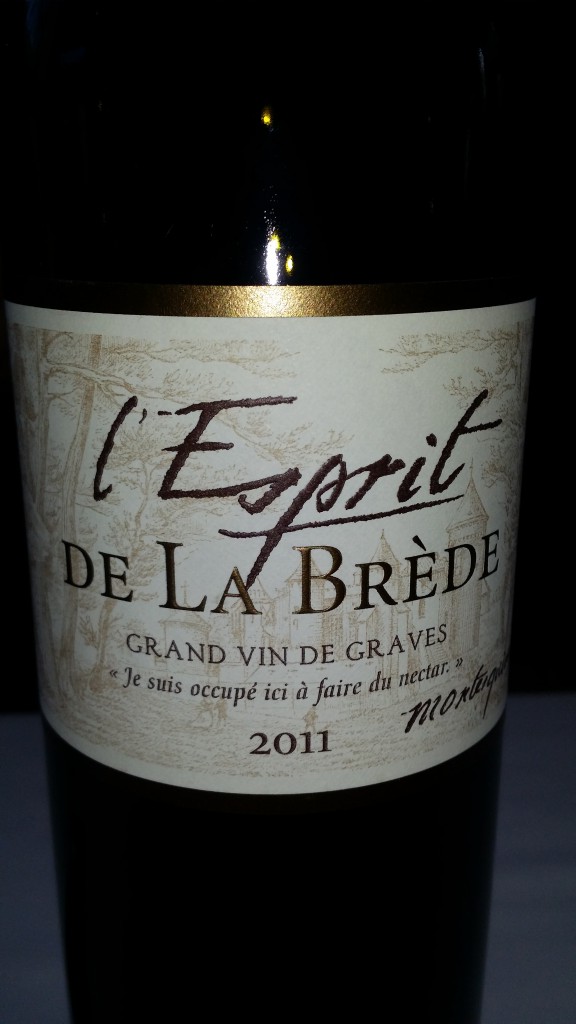 2010 Les Hauts du Tertre, Margaux
This is the second wine of Château du Tertre, a fifth growth in Margaux that is much appreciated by Bordeaux lovers who are seeking quality without paying a fortune.
C: purplish, with medium intensity
N: nice berry fruit, fresh blueberry
T: fluid, light, easy-going tannin, a great luncheon claret! The finish is a little gummy. Needs time, but not much.
Score: 13.5
Price: 21 euros

2011 Esprit de Labrède, Graves rouge
Château de Labrède, a genuine castle and major tourist attraction, once belonged to Montesquieu, and stayed in his family until quite recently http://www.chateaulabrede.com/
The vineyard (4 hectares of red and 2 of white wine varieties) had gone out of existence, but was revived on a tenancy basis by Dominique Haverlan, owner of Vieux Château Gaubert, also in the Graves. This is his first vintage, and a very successful one at that.
C: good, medium deep
N: sweet fruit and oak in a minor key, hints of tobacco and a pleasant greenness
T: round, easy-to-drink, modern, with a puckery, lip-smacking finish. Wine of substance and an unexpected pleasure.
Score: 14
Price: 15 euros 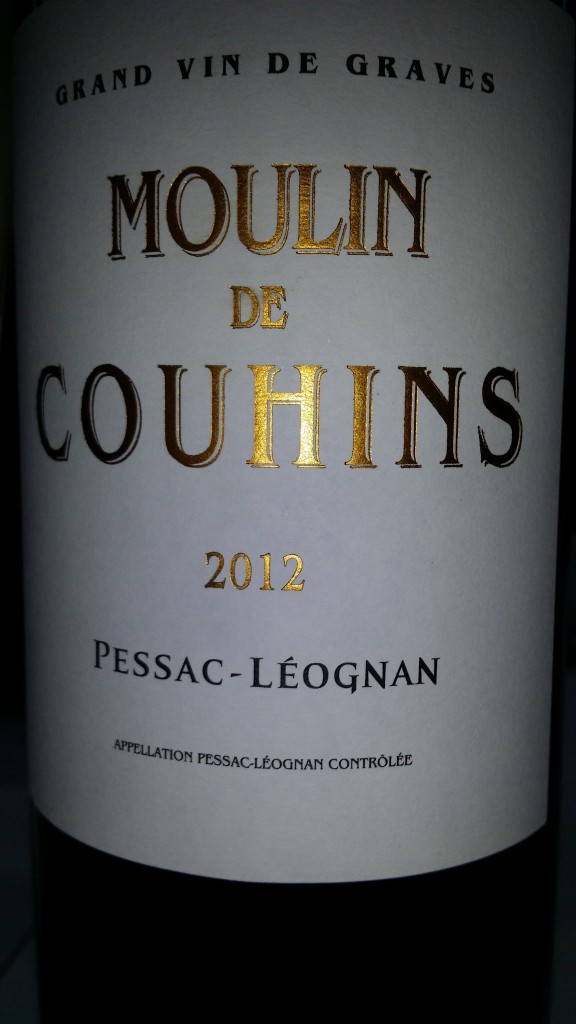 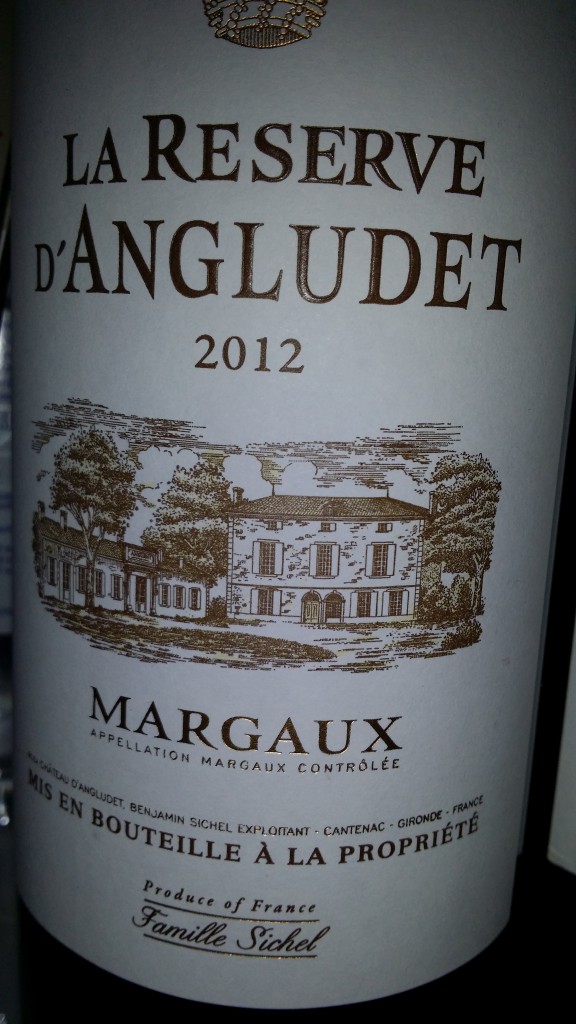 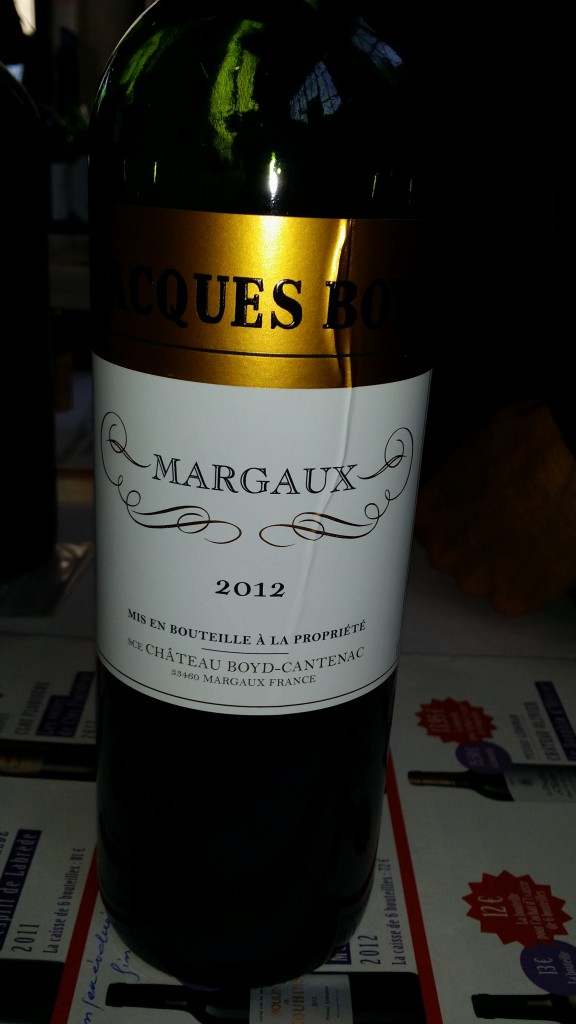 2012 Moulin de Couhins, Pessac-Léognan rouge
Château Couhins is owned and managed by INRA (Institut National de la Recherche Agricole). It has long been under the radar and is a good value for that reason.
C: OK, a little hazy
N: brambly and reflecting its origins, along with discreet oak, and a cosmetic quality
T: sweet, simple, cherry fruit, and light tannin. qaMore grip than most. Should be ideal in 3 years. Some greenness.
Score: 13
Price: 13.50 euros

2012 La Réserve d’Angludet, Margaux
Angludet has long had a strong following, and is especially well-known on English-speaking markets due, in no small part, to the owners, the English Sichel family.
C: medium, a little dull
N: upfront, direct, seems relatively commonplace, but pretty with some nice notes of black fruit jelly, with a touch of greenness
T: suave, light, and pure. Nice juicy aftertaste with good tannin but in a minor key. Attractive, to drink young.
Score: 14
Price: 19 euros

2012 Jacques Boyd, Margaux
Third growth Boyd Cantenac has long had a low profile, but it is a stalwart classic as far as I’m concerned.
C: a little weak
N: old-fashioned, classic Médoc typical of the Margaux appellation. Light, engaging, with some vanilla oak overtones
T: starts off chewy, becoming light on the palate with a pleasing mineral element on the tail end
Score: 13
Price: 24 euros
Lucien Guillemet was also showing the 2002 Jacques Boyd, but this was very tertiary and past its best.
2010 Diane de Belgrave, Haut-Médoc
This classified growth and exclusivity of CVBG (Dourthe-Kressmann) deserves more of a reputation than it has. My notes show a wine that is good rather than very good, but at 13 euros a bottle, this was tremendous value for money.
C: good, medium deep with purplish overtones
N: sweet, pure candied fruit with some class. Rather feminine.
T: sweet once again. Charming and seductive, even if quite simple. A real crowd pleaser. The tannin on the finish, however, is perhaps too rough compared to the wine’s intrinsic body.
Score: 12.5
Price: 13 euros 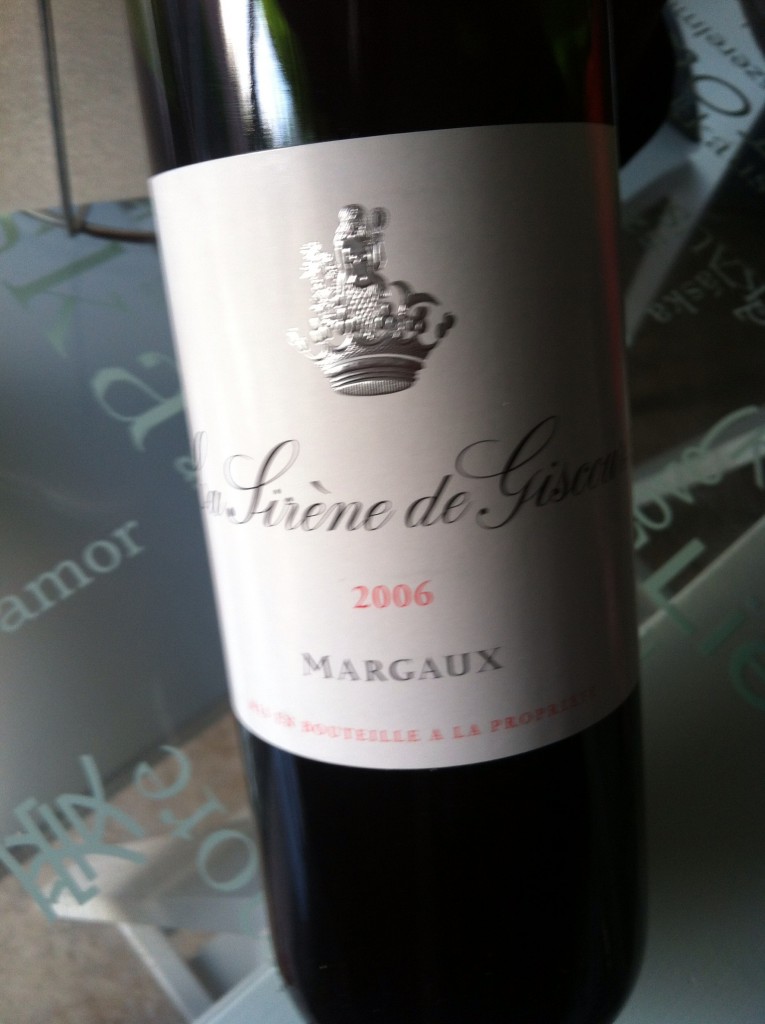 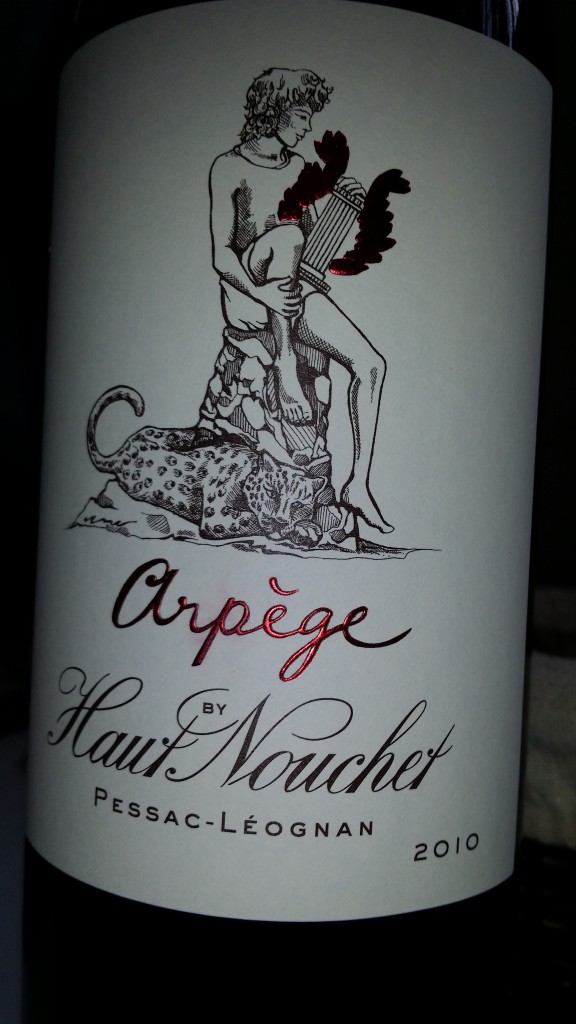 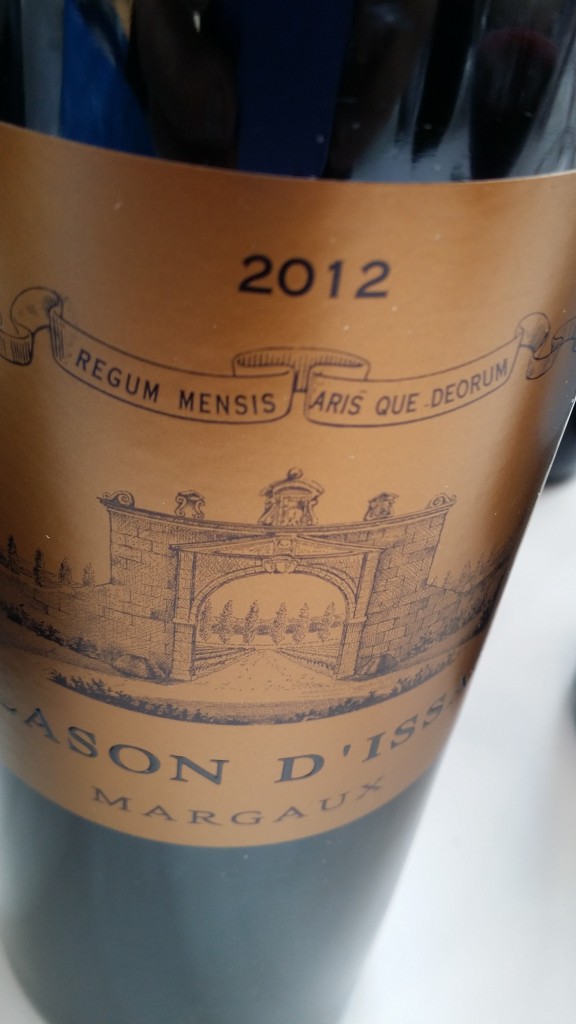 2006 Sirène de Giscours, Margaux
After going through a variety of phases, Giscours has seemed back on track in recent vintages. This 9 year old second wine, however, was not the best reflection of what the château can do.
C: looking older than its years
N: old, indeterminate, past it
T: ditto
Score: no score given
Price: 26 euros

2010 L’Arpège de Haut-Nouchet, Pessac-Léognan
I am not familiar with this estate in Martillac.
C: medium-light with darker core
N: simple and closed with berry fruit. Lacks depth.
T: better than the bouquet. Sweet, but hollow and rather one-dimensional. Tart, bitter finish.
Score: 10.5
Price: 13.5 euros

2012 Blason d’Issan, Margaux
Issan is unquestionably one of the best third growths (there are ten of them…) in the Margaux appellation. It is now 50% owned by Jacky Lorenzetti, who also owns Pédesclaux and Liliane-Ladouys.
C: good, youthful
N: straightforward, with lovely, subtle Margaux berry fruit
T: good body and melts in the mouth. Bigger than expected. Magical. Good balance. Nice to drink as of now.
Score: 14
Price: 21 euros 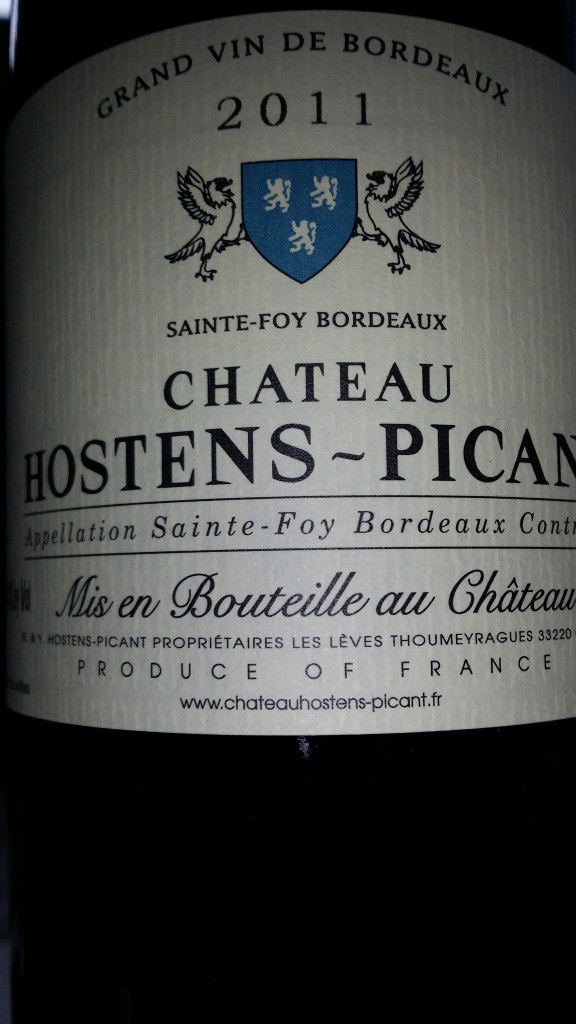 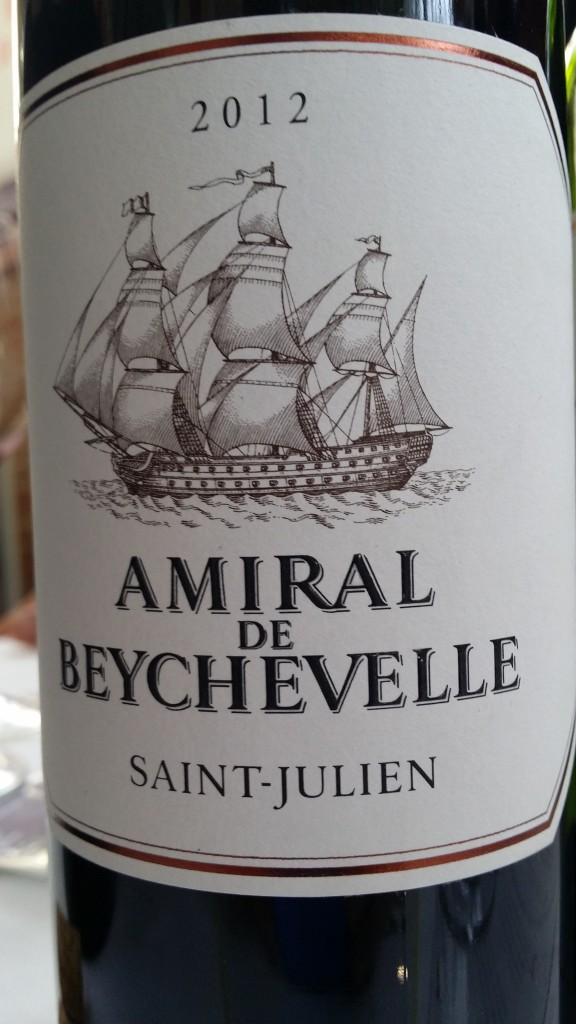 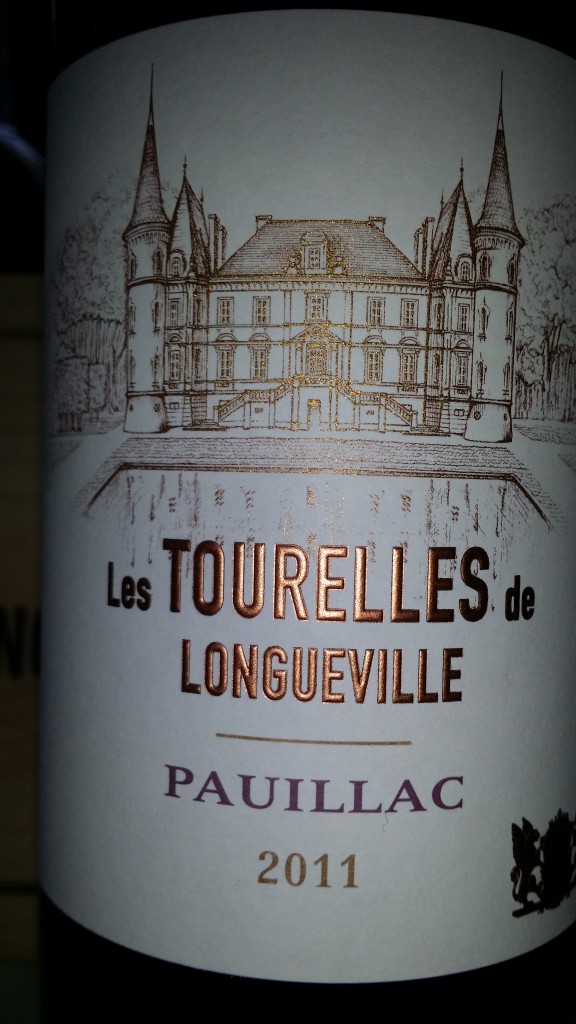 2011 Hostens-Picant, Sainte-Foy-Bordeaux
This estate is located in the tiny and not well-known Sainte-Foy-Bordeaux appellation. I had only previously heard of their white wine.
C: average
N: some ash, quite one-dimensional
T: sweet, but not in a good sense. Barely drinkable. Dry, nasty finish.
Score: no score given
Price: 20 euros

2012 Amiral de Beychevelle, Saint Julien
Fourth growth Beychevelle is clearly on the up-and-up. This was one of the best wines of the tasting.
C: medium-deep
N: solid, well-focused brambly fruit with good definition
T: fleshy and big. Maybe not a long aftertaste, but lovely cherry flavors and good tannin. Potential for ageing there. Archetype of a good 2nd wine. Not second rate by any means
Score: 14.5
Price: 38 euros

2011 Tourelles de Longueville, Pauillac
This has long been considered one of the best second wines in the Médoc. Only now, Pichon Baron will be producing another second wine – like Clos du Marquis and les Forts de Latour – that claims it isn’t really a second wine… This is called Les Griffons de Pichon Baron, and was first made in the 2012 vintage.
C: medium-deep with a lightish rim
N: deep and enticing, but closed. Some chocolate overtones.
T: silky, satiny texture. Sweetness on palate with high-quality tannin that melts in the mouth with just a hint of greenness. A round, friendly Pauillac that will nevertheless improve.
Score: 14
Price: 39 euros 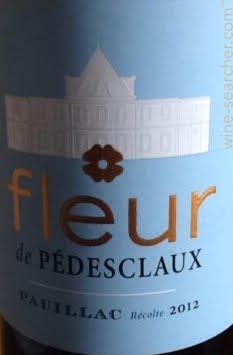 2012 Fleur de Pédesclaux, Pauillac
This fifth growth was nothing short of obscure until Jacky Lorenzetti (an Italian speaker from Switzerland who made his fortune with the Foncia real estate chain) bought it and turned it around.
Pédesclaux is rare in that it is a Pauillac made from 100% Merlot!
C: medium thin with purplish rim
N: sweet, pure bouquet with coffee-vanilla nuances
T: round as one might expect, but also rich, sweet, gummy, and lip smacking good
Score: 13.5
Price: 21 euros 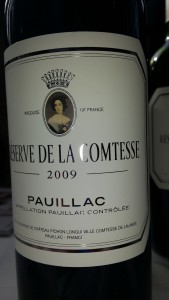 2009 Réserve de la Comtesse, Pauillac
One expects a great deal from a “super-second” that is universally appreciated, especially in a vintage like this. I was not disappointed.
C: OK, medium-deep, not entirely clear
N: a little simple, but reminiscent of the grand vin. Sweet with graphite overtones.
T: round and sensual with lovely soft tannin. Great finish and showing very well at present (can be enjoyed as of now), but will be fine for the next 5 years. Good acidity.
Score: 14.5
Price: 42 euros

On to the Right Bank… 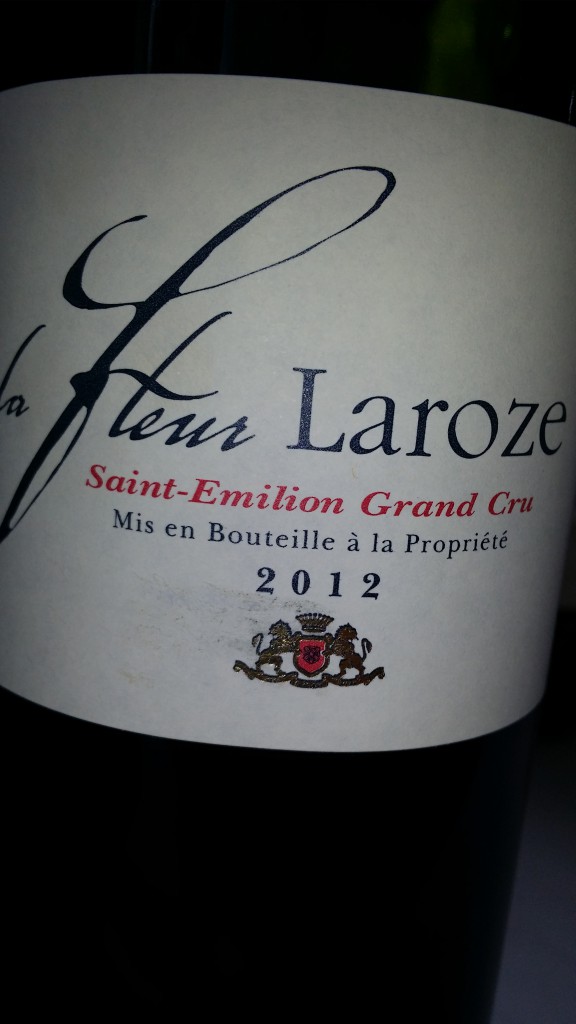 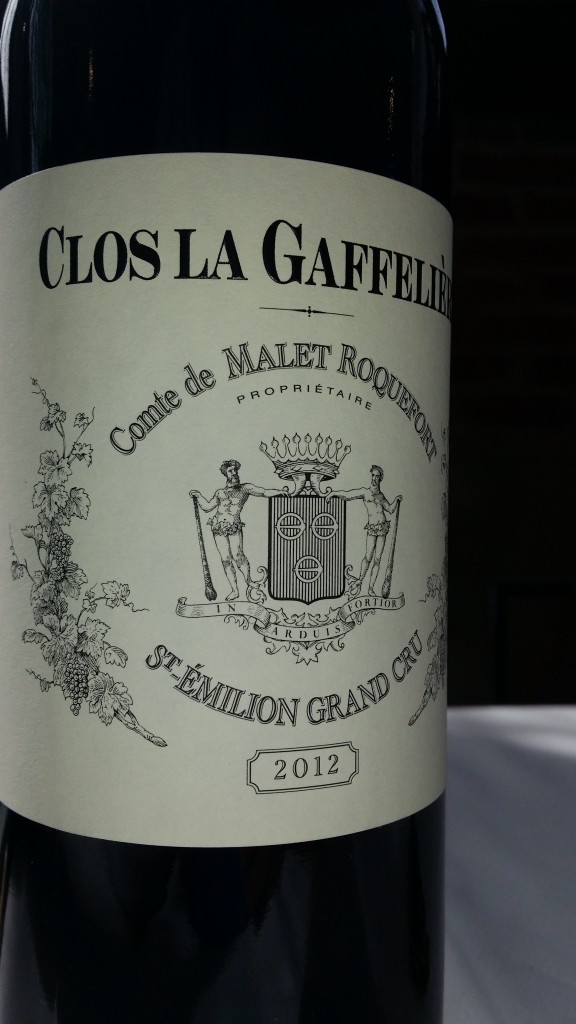 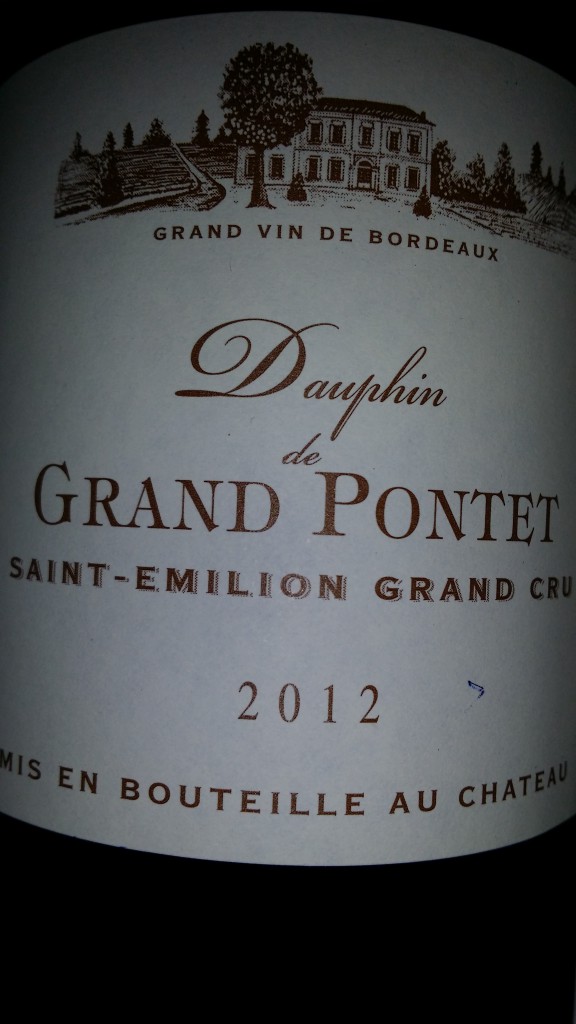 2012 La Fleur Laroze, Saint Emilion
I am not very familiar with this 27-hectare grand cru classé.
C: light and bright
N: a little green and rustic but with deep fruit even so
T: big with good minerality
Score: 12.5
Price: 13.50 euros

2012 Clos La Gaffelière, Saint Emilion
I am not alone in having some severe disappointments in the premier grand cru classé Ch. La Gaffelière. But the owners have called in consultant Stéphane Derenoncourt and things have changed for the better.
C: medium light
N: lovely, pure, perfumed
T: very soft and upfront, melts in the mouth. Drink sooner rather than later. More voluptuous and big breasted than serious, but lots of pleasure there…
Score: “objectively” 13, but this is a joy to drink
Price: 19 euros – tremendous value for money. 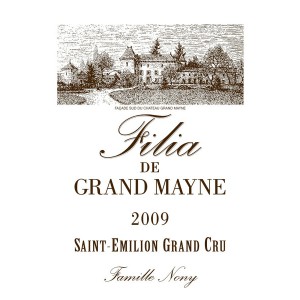 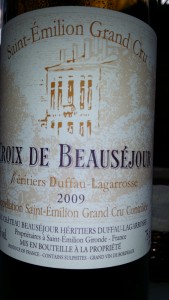 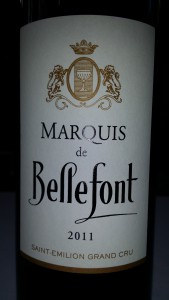 2009 Filia de Grand Mayne, Saint-Emilion
This 18-hectare classified growth has a strong following.
C: very deep
N: coffee, blackberry jelly, and a little rustic
T: big mouthful of wine but a little hollow (weak on the middle palate). Modern with some heat on the finish. Hearty, but lacks finesse. One wonders why the second wine has to be this concentrated. Perhaps a feature of the vintage…
Score: 12
Price: 16 euros

2010 Haut-Faugères, Saint-Emilion (sorry, not shown)
Faugères was promoted to grand cru classé status, and enjoys a good reputation, like the other Silvio Denz wines.
C: very dark and good
N: slightly oxidized
T: better on palate, but top-heavy and still off
Score: not scored
Price: 16 euros 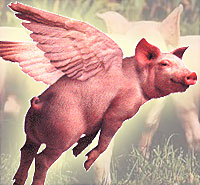 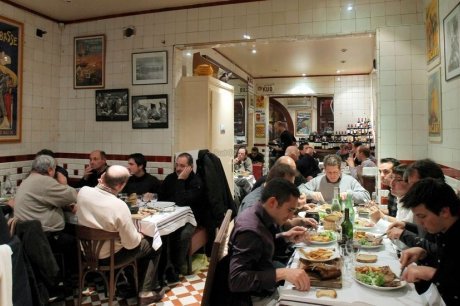 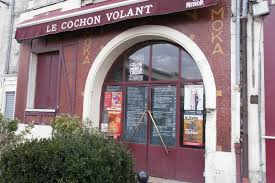 After the tasting, my friend Pierre and I had lunch at the Cochon Volant, a nearby restaurant. This is a wonderful, earthy place featuring the best of cusine from Southwest France. Warning: portions are enormous!
We enjoyed a 2009 Ch. Moulin-à-Vent (Moulis) with lunch.