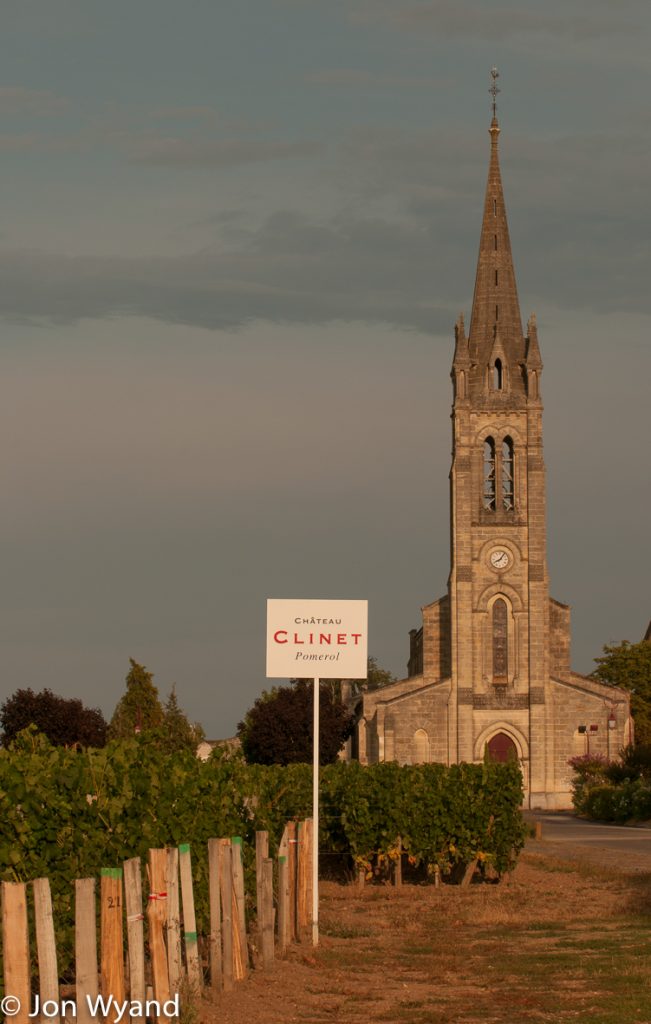 How many of us really know the wines of Pomerol? One of Bordeaux’s smallest appellations (about 800 hectares) produces wines that have risen dramatically in reputation – and price – over the years. They correspond completely to what modern consumers are looking for in Bordeaux. At their best they are voluptuous, elegant wines that are pleasurable to both neophytes and connoisseurs, as well as enjoyable both young and old. What’s not to like?

As opposed to the Médoc, Saint Emilion, Sauternes, and Pessac-Léognan, there is no classification in Pomerol. Of course, a sort of de facto classification exists based on price and critics’ scores, but there are more possibilities here to rise through the ranks. Such wines as Lafleur and Le Pin had a very low profile not so long ago and went on, of course, to become darlings of the wine world.

Consumers, wine writers, and critics have, as to be expected, latched onto a few names that are endlessly repeated, in no small part because these tend to be largish estates in an appellation that does not count many i.e. the wines are more widely distributed worldwide. But relative newcomers can rise to the join the elite, which is precisely what Château Clinet has done.

Pomerol’s fairly undramatic history is that of a winegrowing town whose ups and downs generally revolved around the inheritance and changing hands of estates. Unlike other parts of Bordeaux, there are few noteworthy château buildings to bear witness to this history. Clinet’s can be traced back to the late 16th century and the place name appears on Belleyme’s famous 1785 map (a facsimile is hung on the wall at Clinet). A document dating from 1837 shows that Clinet and Pétrus had the same owner. Over time, Eglise Clinet, Clos l’Eglise, and Feytit Clinet were spun off from the original estate. Château Clinet’s wine was always well-regarded and sold well, but it did not really start to stand out until the 1980s when Jean-Michel Arcaute, advised at one time by Michel Rolland, took things in hand to progress by a quantum leap. Clinet, a more-or-less second tier Pomerol, joined the first tier.

Impressively high Parker scores helped catapult Clinet to center stage, where it has stayed ever since. 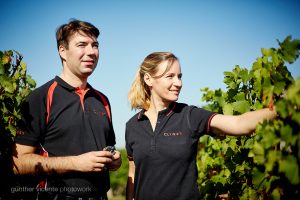 The estate was sold to the GAN insurance group in 1991 and then acquired by Jean-Louis Laborde from the nearby Lot-et-Garonne department in 1999. He handed over management to his son, Ronan, in 2004. Today just shy of 40 years old, Ronan is still in charge.

Ronan Laborde is somewhat of an anomaly in the world of great growth Bordeaux, to which Clinet is obviously assimilated. That he is young and has a business degree is not so uncommon. Neither is the fact that his experience in the wine trade spans several continents, despite his age. But Ronan has a fresh go-ahead attitude that has led him to do things differently. Take his creation of a branded Bordeaux called, appropriately enough, “Ronan”. It takes a brave man to do such a thing! He built a new cellar for his négociant activity a stone’s throw from Clinet and now sells going on 300,000 bottles a year of his (largely red) Bordeaux AOC.
Ronan Laborde also manages the family estates in Tokaj, Hungary: Châteaux Megyer and Pajzos.

In March of this year, Ronan was elected president of the Union des Grands Crus de Bordeaux, the promotional association that brings together the cream of Bordeaux producers (134 members) and is responsible for organizing tastings around the world, including en primeur week in March/April every year in Bordeaux.

The style and the feeling at Clinet reflect that of the man running the show: professional, but relaxed.

I met Ronan at the unprepossessing country house with red shutters built in 1820 that is Château Clinet. However, appearances can be deceiving… The winery is state-of-the-art, including a system with 400-kg. hoppers (cuvons) on rails that gently deposit freshly-picked grapes into temperature-controlled stainless steel vats to avoid bruising. The wine undergoes pigeage (punching down the cap) and gentle pumping over. It is aged in 60% new oak, a proportion that is down from a few vintages ago. The 8-10% press wine is blended in as needed.

When the Laborde family took over, the Clinet vineyard consisted of 8.64 hectares in three separate parts: one around the château, another north of the town church, and a third between Trotanoy and Feytit Clinet. This was increased by 3 hectares when 4 tiny plots within the appellation were acquired in 2011. Grape varieties are 85% Merlot, 10% Cabernet Sauvignon, and 5% Cabernet Franc. A second wine, Fleur de Clinet, is also made. 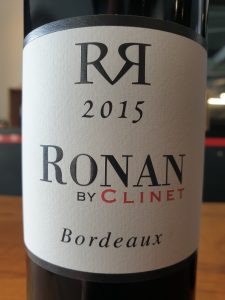 2015 Ronan by Clinet:
Color: Showing a little brown on the rim already.
Nose: Reflecting its 100% Merlot composition with ethereal red fruit.
Palate: Soft, but with decent backbone. Aftertaste maybe a little short, but unmistakably fine Bordeaux with a pleasant thirst-quenching side. Touch austere, but this does not detract from the overall balance. 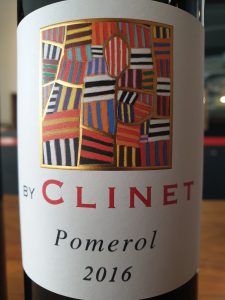 2016: “By Clinet’
Color: Medium-deep and vigorous with some purple highlights.
Nose: Almond and vanilla aromas one associates with certain of the best Pomerols. Subtly rich.
Palate: Powerful attack. Silky texture with fine-grained tannin. Smooth and already approachable. Good value because it has all the hallmarks of its appellation. 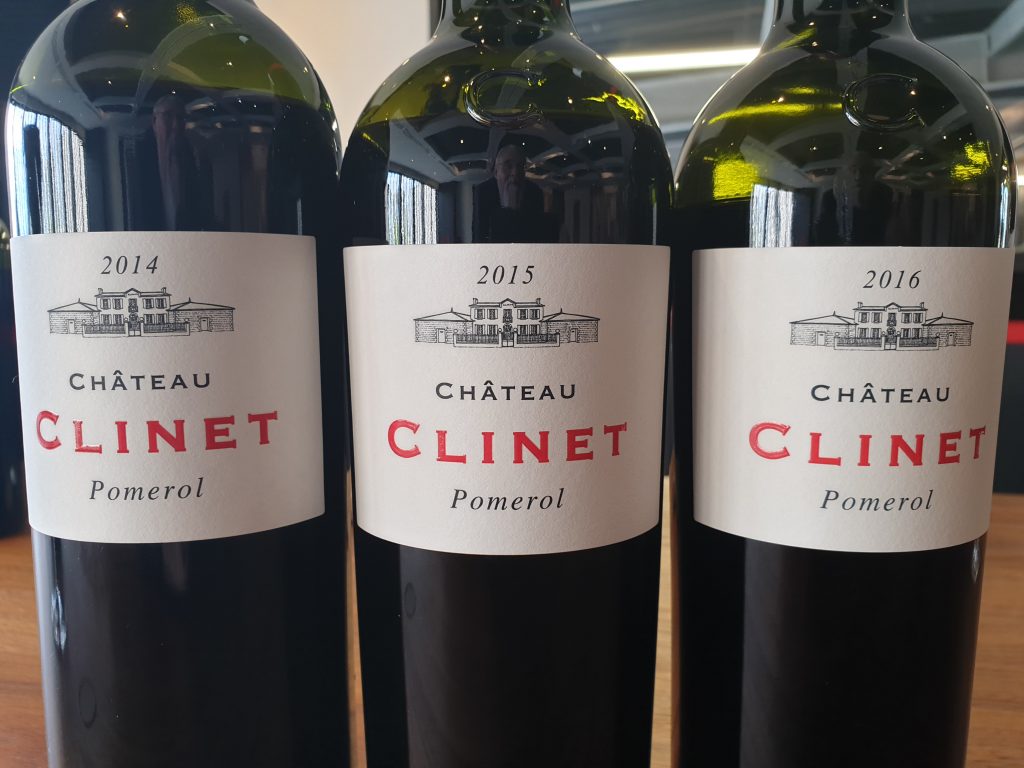 2014 Château Clinet:
Color: Medium intensity, just starting to show a little age.
Nose: Very attractive, classy, assertive bouquet with berry notes and a nuance I can only describe as blood, which I also find in some Syrah wines.
Palate: Iron and mineral flavors with a touch of greenness balanced by black and some red fruit overtones.

2016 Château Clinet:
Color: Lovely, very deep hue, even more so than the 2010 says Ronan.
Nose: Fresh, but with musky hints in the background and some menthol to complement the exuberant fruit.
Palate: Round, big, and lip-smackingly good! Fresh aftertaste with some empyreumatic nuances. Firm, slightly smoky, and with great potential.

Ronan invited me to share lunch with him at the cellar after the tasting, during which we enjoyed a 2008 Clinet. This had taken on wonderful aromatics of game and incense with age.

As I wrote at the beginning of this article, Pomerol is a hard region to get to know. I therefore thank Ronan for giving me with a better handle on the appellation by providing me with an insight into one of its best wines.